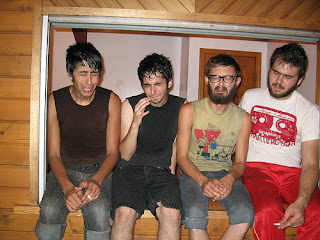 I posted their website that has their entire discography up for download, you can read that here.  They just released a new song that will be off their new album, Naps.  The song marks an even closer return back to the singing they had on their debut album, New Ruins.   It's been interesting because they started off as a emo/post-hardcore band that had very melodic and clear vocals.  Immediately after that album and the dispute with the label, they went to the complete other side of the spectrum.  They focused on the guitar work and the vocals became drowned in the background with barely comprehensible screaming.  Over time, they shifted slowly back to bringing vocals more to the forefront; their last LP, Snacks, saw the vocals being more of a yell then a curdling scream.  Now in this new song even the yelling gets somewhat melodic and could even be considered singing at certain points.  And as always the guitar work is great.  I am very excited to hear Naps, and it should be released soon.  For now here is: "Hibernationstate".