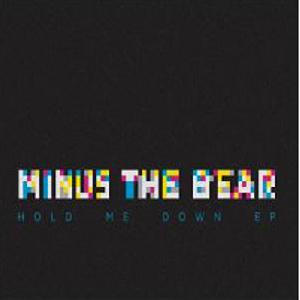 
"Minus The Bear has posted their new EP Hold Me Down for free download. It features the title track (originally found on 2010's OMNI, a b-side entitled "Broken China," a remix of "My Time" and three tracks recorded live at the Dangerbird Records studios."
-Punknews.org

I think the general consensus was that Omni was a disappointment, and I would be part of that consensus.  However, I did find some songs enjoyable.  I liked Hold Me Down mainly because I liked the little 80's feel bridge in  the middle (Givin' you up...I'm givin' you up...again...yea...).  The Mitchmix remix of my time is better than the original, which isn't saying much because the original wasn't that great of a song.  The b-side song "Broken Song" is actually better than a lot of songs on Omni.  But I also liked their b-side "Electric Rainbow" from Planet of Ice (how did that song not make the cut?).

Email ThisBlogThis!Share to TwitterShare to FacebookShare to Pinterest
Labels: Experimental, Indie, Math Rock, Minus the Bear