Has Been Defeated by Foxwarren (2011) 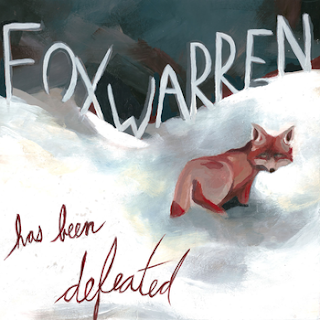 "It's hard enough to write songs that truly have atmosphere, much less maintain such a thing over the course of a whole record, however Foxwarren have achieved this with 'Has Been Defeated,' a style seldom debut record.

Even though it runs short of 25 minutes, 'Has Ben Defeated' has an impact greater than its footprint suggests. It’s a record drenched in nostalgia and suffused with sense deep-set sense of regretful longing, tugging away at the strings binding together its particular brand of melancholic folk pop. Though it sometimes skates close to indulgent melodrama, its honesty and sense of battered worldliness carries it though."
-Alter the Press

This band is a self-proclaimed folk band, but I think there are definitely hints of classic midwest indiemo also in play here.  And the ending to the second song, "Leave but Stay the Same" is borderline screamo.  There certainly is a lot incorporated in this album: folk, indie, pop, horns, emo, screams, banjos, piano...It's a wonder how a band had the resources to burst in with a well-produced, instrument-varied debut like this.  I was skeptical that this would just be another Fleet Foxes/Mumford and Sons type folk band, but they actually have a sound that is quite different.  This could really be an example of a bridge between emo and folk fans.