so drunk its fuckin Thursday II: Look out for #1 Brothers Johnson 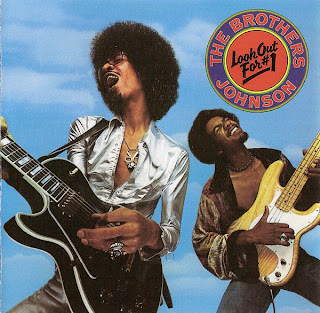 For the fans of: The Jackson 5, Sly & the Family Stone, The Supremes
Genre: Funk
Listen here: Mediafire

Look out for #1 is the debut album of the brothers. Probably my favourite funk album of all time, George (left) and Louis (right) have got 'it' all, and as their producer Quincy Jones puts it, "These are the baddest cats I've ever heard!" Boasting the stage-names Lightning Licks and Thunder Thumbs, respectively, the versatility of style is an outstanding asset for their first album. Though, the licks can at times take you strait into that 70's studio-session atmosphere, dancin' and prancin' about; for me, its the instrumental tracks like Tomorrow that really furnish the album. Look for more of these brothers, as they aged through the 80's their music really takes a turn towards discotheque, not to say its for the worse, but needless to say this is a house specialty. Louis, the younger brother, became a very prominent studio bassist for Quincy productions, recording on a large variety of albums, most popularly, Michael's Off the Wall and Thriller.
Posted by sam at 3:47 PM