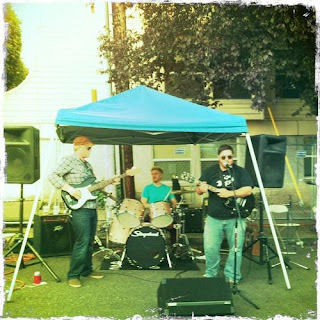 Portland, OR-based Holy Tentacles attempts to concoct a homebrew of genres by mixing math rock with pop and progressive rock. You can definitely hear the trio's influence of of Maps and Atlases, as well as Minus the Bear, but that is not a bad thing, as they have created their own sound. Typically I would include a link to download this album for free, but because these guys e-mailed us directly, I feel a tad shady doing that. Instead, I am going to suggest that you head over to their Bandcamp to listen to the whole thing, and purchase it for $5 if you so choose.

They are currently touring in support of this self-released 7-song EP. Check out an acoustic performance of the song featured in the preview, "Backpack":

One thing I thought was particularly neat about this band: they just released their own beer! It's called Divine Ink, and it's a hand-crafted, hand-picked blackberry weizen. It would be awesome to visit Portland and try it!